Not long ago the first women premier was elected in Ontario. In addition to that though another type of history made was that this women was in addition gay. She has become the first openly gay women premier in Ontario. This is wonderful that LGBT people are finding there way into the governments of nations. I know of mostly celebrity LGBT people. But there is a severe lacking of LGBT politicians. But now in this age we are entering LGBT are starting to join the political system not only as voters but also as the politicians themselves. So not only do we have a voice by votes. But soon everyone should hopefully have someone to represent that voice that isn’t just an organization but an actual official of the government.

So let us all join together in spreading our voice but also giving representation to that voice we have.

Happy LGBT Pride Month to all my readers from the U.S and to everyone who can’t enjoy a month of pride hopefully those of us who can. Can help you bring about a change that will allow such a month.

Also everyone please join in on the Rainbow Invasion

On a final note. Ontario Made History 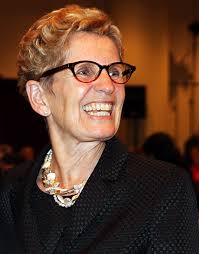